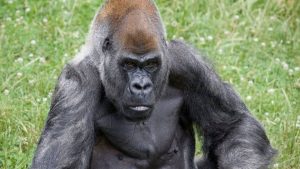 The western lowland silverback was found dead by his “heartbroken” care team at Zoo Atlanta in Georgia, US, on Tuesday morning, January 25.

The gorilla who died at the age of 61, is said to have lost his appetite since last week and was being provided with supportive care to encourage him to eat and drink.

But over the last 24 hours he had been treated for facial swelling, weakness and an inability to eat or drink, the zoo said.Raymond B King, the zoo’s president and chief executive, said:

“This is a devastating loss for Zoo Atlanta. While we knew this time would come someday, that inevitability does nothing to stem the deep sadness we feel at losing a legend.

“Ozzie’s life’s contributions are indelible, in the generations of individuals he leaves behind in the gorilla population and in the world’s body of knowledge in the care of his species.

The gorilla first arrived in Atlanta in 1988, and was part of a scientific milestone when he became the first gorilla to get a blood pressure reading.He held the title of oldest male gorilla, but Fatou, a 64-year-old female at Berlin Zoo is still the oldest living gorilla.

Last year, Ozzie was one of 13 gorillas at Zoo Atlanta who tested positive for COVID-19. Officials said they believed the apes contracted it from a fully vaccinated zoo worker who was wearing protective equipment. The worker was asymptomatic.

The zoo said it would release the results of Ozzie’s post-mortem after it is completed by the University of Georgia’s veterinary college.