Pastor Timi Adigun has reacted to allegations leveled against him by Nollywood actress, Olayode Juliana aka Toyo Baby. 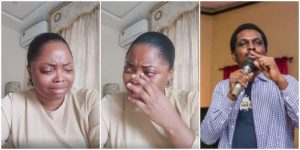 The actress had accused the pastor of allegedly taking control of her social media accounts and locking her out.

Reacting, the pastor said he doesn’t have her passwords. According to him, he already handed it all over to her.

The man of God further stressed that the actress disrespected him by coming to his church and calling him by his first name.