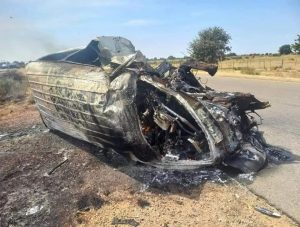 The State Corp Commander, Utten Iki Boyi on Tuesday morning confirmed that six people were involved in the accident which occurred on Monday, but three were rescued to a nearby hospital.

According to him, the incident occurred around Benisheik area when the vehicle somersaulted and went up in flames.

“Immediately we got the report, our team rushed to the scene of the incident. Three people were burnt beyond recognition. However, the three were rescued and taken to Benishiek General Hospital for treatment.

“I can confirm to you that unfortunately, three lost their lives,” he said.

It was gathered that the three passengers, who got burnt, were staff members of Shehu of Borno while three others survived with injuries.