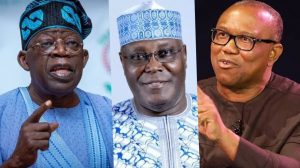 Sowore claimed that Peter Obi, Atiku Abubakar and Bola Tinubu will not take up the challenge because they have no idea.

Sowore threw the challenge on Wednesday while appearing as a guest on Channels Television’s Politics Today programme.

“Bring me and Obi to discuss our ideas on your show, I guarantee that he would not come.

Sowore added that they should be afraid to debate with him because they have no idea what to talk about.