The General Superintendent of the Deeper Life Bible Church, William Kumuyi has told Nigerians the kind of candidate they should vote for in the upcoming 2023 general elections. 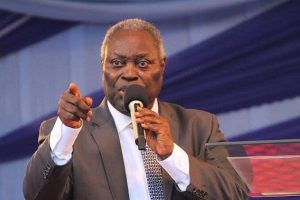 According to him, Nigerians should vote for people of integrity with capacity to make Nigeria a better country, according to a report by NAN.

Kumuyi, who arrived Yola for a global crusade scheduled to begin on November 24, advised against voting for people on sentimental grounds.

“Those eligible to vote should look at the people asking for vote and examine what we know about them. We are not voting by sentiment, we are not voting because of religion,” Kumuyi told newsmen on arrival at the Yola International Airport for the scheduled crusade.

“We are voting for people who we believe that as individuals will make our country great,” he added.

Kumuyi said Nigeria is a huge country that with the right leaders could be made to fully justify its numerical strength in other ways than just numbers.
“We are still the giant in Africa by population but we need to be giant in every area and so we want to vote for people who can get us there,” he said.

Kumuyi is in Yola for a six-day ‘Global Crusade with Kumuyi (GCK)’ which the Yola local organising committee told the media last week will have over 70,000 people from Adamawa State and the environs.

The Global Crusade with Kumuyi (GCK) is slated for Thursday 24th to Tuesday 29th, November, 2022, at the Deeper Unity Camp Ground, Kwanan Waya, along the Yola-Numan higway.

The six-day crusade with the theme: ‘The power that never fails”, seeks to draw attendance from not only the Deeper Life Bible Church but people from other denominations and faiths.