President Muhammadu Buhari has received a warning from Yoruba Nation activist Sunday Igboho in response to a remark he made about the Biafra civil war. 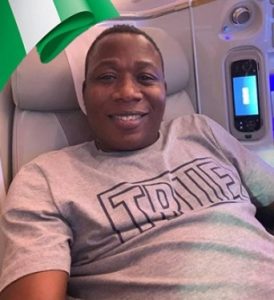 Millions of Nigerians were slain during the Biafra civil war, according to Buhari, in order to maintain national unity.

Additionally, he advised political figures to maintain their composure and keep the overarching goal of advancing the national interest.

He stressed that the country can’t afford another civil war.

Reacting, Igboho, in a statement by his spokesman, Olayomi Koiki, said: “We know President Muhammadu Buhari is the Patron of all the Fulani worldwide. But Yoruba land can never be conquered by Fulani.

“President Muhammadu Buhari was reminding Nnamdi Kanu and the Igbos of the massacre they carried out during the Biafra War. The President should know that this can never be repeated again in any of our land.

“We have all woken up to Fulani Agenda.”