Chelsea has announced the signing of defender Marc Cucurella from Brighton & Hove Albion. The Spanish full-back, 24, signed a six-year deal at Stamford Bridge after completing a medical on Thursday afternoon. 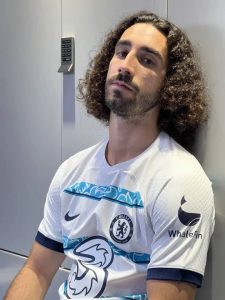 Chelsea will pay an initial fee of £55million for Cucurella, plus a potential £7million in bonuses, while Levi Colwill will join the Seagulls on loan in a separate deal.

The Blues announced his arrival via social media and took a playful dig at Brighton after they denied reports that Cucurella was on his way to Stamford Bridge.

Speaking to the club website, the defender detailed his excitement to play for ‘one of the best clubs in the world’.

Cucurella said: ‘I’m really happy. It’s a big opportunity for me to join one of the best clubs in the world and I’m going to work hard to be happy here and help the team.’

The ex-Barcelona player becomes the seventh most expensive defender of all-time, with Harry Maguire still topping the list following his £80million move from Leicester to Manchester United in 2019.