Controversial Nollywood actor, Uche Maduagwu has taken to social media where he lays heavy curse on veteran journalist Kemi Olunloyo for trolling Davido following the death of his son, Ifeanyi. 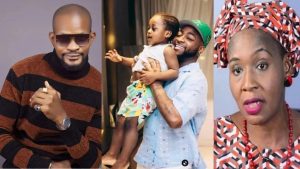 However, , the Adeleke family had been thrown into mourning following the death of their beloved boy. The tragic death of Ifeanyi sparked a lot of reactions among social media users as they trooped and expressed their heartfelt condolences.

However, controversial journalist, Kemi Olunloyo who is obviously not cool with the singer for a long time now has been for always dragging Davido and his family after Ifeanyi’s death.

He rained curses on Davido together with the bereaved and noted that the “Fall” hitmaker is suffering from the #Adelekecurse among others.

Reacting, Uche Maduagwu tackled the journalist over her aberrant behavior and has stated that she’d live a destitute life of selling akara by the road side and surviving by begging for N20 on the streets.

He wrote; “Any 58 year old person rejoicing at Those Mourning get unresolved Ancestral Curse following am like Google Map. God tell me say Na for Bus Stop you Go SIDON Dey beg for AKARA and 20 Naira to Chop at 60 for all your LIE at David, Chioma and Great IFEANYI. Wetin You SOW, you go REAP can I hear AMEN.” 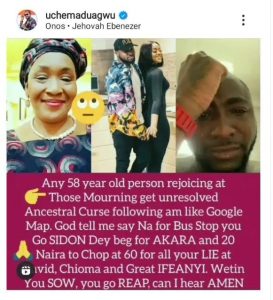