A mild drama played out at Ondo State Police Command Headquarters, Akure on Monday as children who were part of 77 people rescued from an underground room of Whole Bible Believers Church, popularly known as ‘Ondo Church’ refused to follow their parents home until after their ‘Pastors’ are released by the police. 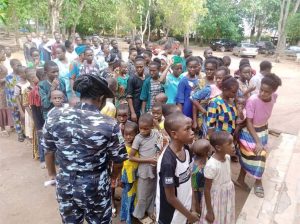 The twist became more amazing as the parents of most of the victims cried out over the refusal of their children to go home with them as a result of the alleged hypnotization of the children and adults among them.

Some of the parents who besieged the police headquarters, said their children have insisted that they will not leave the station until the arrested pastors are freed.

Lamenting that the children had been hypnotised with what they described as black magic, the parents maintained that the victims should be thoroughly examined psychologically.

One of the parents, Michael Olorunyomi, disclosed that her 21-year-old daughter, Priscilla, had refused to eat since Saturday claiming that the pastor must be released.

He said, “I was a member of that church and I was there for 32 years. Everything about the church changed when Peter Josiah became an assistant pastor in the church. He brought in destructive heresy.

At the end of the day, I overpowered her and took her home.

“Since we got home on Saturday night, she has refused to eat up till this moment. She didn’t eat throughout yesterday. I am seriously bothered because of the situation.’’