No fewer than four children have lost their lives in Ondo State after they were electrocuted at the Oke-Aigo axis in the Ile-Oluji/Okeigbo Local Government Area of the state. 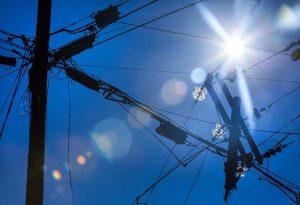 The tragedy occurred after a newly installed power cable fell on a container which was being used as a shop.

According to eyewitnesses, the children were playing inside the shop, with two of the victims said to be siblings who had visited their aunt for the Easter holiday.

One of the survivors, who identified herself as Blessing, said it was when electricity was restored in the area that the cable fell on the container shop.

“As we ran out of the container, the wire trapped our legs and we could not walk again. So, I sat on the plank that was close to me, but the remaining children started shaking and vomiting blood.

“I shouted for help and people came to rescue us and we were rushed to the General hospital, Ile-Oluji,” she said.

Owner of the shop, Mrs. Ronke Adebiyi, who said she was not present when the incident occurred stated that she rushed to the scene when she received a call that her shop was burning.

She added that the children were rushed to the hospital, but there was insufficient oxygen that could use for five of them which according to her led to the death of the four others.

While cautioning against erecting structures under high tension cable or power supply line, the Senator representing Ondo South, Nicholas Tofowomo, vowed to ensure the parents get justice if the BEDC were found culpable in the tragedy.