The story of how Chacha Eke-Fanni, a Nollywood actress, and Austin Faani, his estranged husband, has come to light. 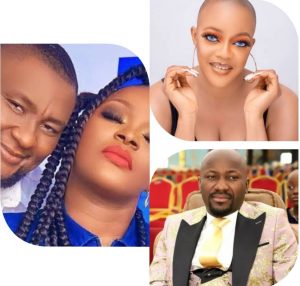 Chacha Eke-Fanni recently came out to berate him, accusing him of domestic violence and saying that she would not put up with it any longer before she passes away.

Popular blogger Gistlover, revealed some vital secrets with additional information that would be provided here.

“Hello tueh tueh, Now y’all asking for the full gist without mincing any words, here we go (g) Chacha is a very fantastic actress and a household name in Nollywood, Eve Esin brought her to asaba from oh to act, she was squatting with Eve because she just left her baby which she had for an older man in abakiliki then for Port Harcourt (I am sure a lot of you don’t know this part of her) When Eve brought her to Asaba, she didn’t treat her well cos she was making everyone know she was her boss and orders her around Making her carry her bags and all that when they are mates and acting on same movie set, Eve introduced her to Solo Amaco as that one in turns sleeps with both of them for roles, Eve was also the one knacking Austin then for more visibility. Austin was an editor. If you watch most naija movies then, you will see how Eve’s face was everywhere even when she was doing a waka pass. Another actor will be talking but it was Eve face you will be seeing (ea) (e) al ( ( Chacha been a sharp and desperate gal who wants her way to the up played a smart game on Eve, did a kurukere waka and snatched him knowing fully well he is Gay, it’s not hidden to Eve and Chacha because they caught him times without number and his excuse is that he is doing it because of money and all, they all know he is gay, but he is a very calm gay © © she knows that, but they were very compatible. Chacha was hungry, desperate and smart. Austin was very calm, a home oriented gay and he keeps her rooted.

“Then he dumped Eve for chacha, wev the matter cause fight then, Chacha was the new favourite,That was how they turned a force of nature. Traveling to towns together to see men, chacha was a sensational already then, every PH militant and politician wants to do her.

“Austin goes with her as her
manager, collects the dough, sleeps in another room while his girlfriend entertains the paying customer. Then they go back home very rich and happy until oga Austin knack am belle, That was the beginning of their woes, then she got pregnant for Austin and fear of the unknown, fear of those rich men funding their life made them to agree that all through her pregnancy, they got a concoction more like drugs and she was drinking that for the fear of adding weight. She was mostly working with Uche nancy and Iyke odife then. She was so addicted to that thing that it started staining her teeth and mouth, then she hasn’t married Fanny.

“They were only doing kurukere and he had gotten her pregnant, The militant man Na him buy them their first loud Car, got Venza for chacha, got Toyota spider Camry for Austin thinking.

Austin Na Chacha Manager/Brother as introduced to him by chacha, Chacha also told him about about Austin getting married but she no tell am say Na she Austin Dey get married to, the man gave them a lot of money then, and then Apostle Suleman was also in the picture codedly, before you know it the news of their wedding broke out in Asaba, some of the men got really angry say chacha don run them street because he made them to be funding Austin too, funny thing be say all these men are married men ooo, after their wedding, the PH militant got angry and promised to cause havoc ooo, them begin beg am, few weeks after their wedding this Militant man cornered them and collected one of the cars he bought for them and left the FJ cruiser for them, that was how they started couples goals o000, they gave birth and things was not the same way it used to be, Chacha has to go back to the street and Austin is 100 percent aware of it and in supplement so far she brings money home, more like an open marriage, All along Chacha and Austin has agreement that he will stop knacking Yansh(Gay) since he is doing it because of money and she chacha will be providing for the house not knowing say Austin played him and pretended he stopped but he didn’t, Chacha got back for the street and that was how her affairs wish Pastor Suleman got real, Suleman go lodge her and other girls for hotels.