According to an exclusive report by The PUNCH, Stella Oduah, the lawmaker representing Anambra-North senatorial district, did not complete the mandatory one-year NYSC programme. 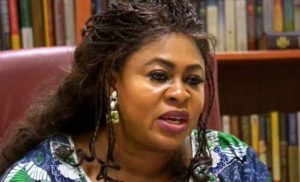 This revelation was made by the National Youth Service Corps, according to the report.

This was stated by the NYSC in a letter labeled NYSC/DHQ/PPRU/783/Vol III.

The agency stated in a letter signed on his behalf by the Director of Press and Public Relations, Eddy Megwa, that Oduah began her NYSC programme in 1982 but absconded.

The letter was written in response to an inquiry from the Concerned Anambra North PDP Stakeholders.

In the previous letter, the group had written a letter to the NYSC accusing some officials of the agency of colluding with Oduah to hide the truth.

In its response, titled, ‘Re: Doubtful NYSC Participation Collusion of Some Unscrupulous Staff of NYSC Concerning Stella Adaeze Oduah (Senator), Save the Image and Reputation of the Scheme’, the NYSC denied colluding with Oduah to hide the truth.

The letter read in part, “In response to your request, we wish to state that the facts of the matter remain as follows: Stella Adaeze Oduah was mobilised for national service in 1982/1983 service year and deployed to Lagos State.

“After the orientation course, she absconded and never completed the national service. The consequence of this is that she is not qualified for the issuance of the certificate of national service.”

Section 2 (1) of the NYSC Act makes it obligatory for every Nigerian who graduates to “make himself available for service for a continuous period of one year from the date specified in the call-up instrument served upon him.”

According to the NYSC Act, the four categories of individuals exempted from the national service are those who graduated above the age of 30, those who have served in the Armed Forces or the Nigeria Police for a period of more than nine months; those who served in intelligence organisations and individuals who bagged national honours before graduation.

It remains unclear how Oduah’s failure to complete her NYSC escaped the scrutiny of agencies like the Department of State Services which usually vet ministerial nominees.

In her form CF001 forms submitted to the Independent National Electoral Commission in 2019, Oduah claimed that she completed her NYSC but her certificate was missing along with other credentials.

An affidavit she deposed to read in part, “Sometime in 2010 while in transit from Akili Ozizor in Ogbaru local government area to Abuja, I discovered that some of my personal belongings were missing.

Oduah, who served as Minister of Aviation before she was relieved of her duties by former President Goodluck Jonathan, also came under scrutiny in January 2014 when Sahara Reporters quoted authorities at St. Paul’s College, where Mrs. Oduah claimed she studied for Bachelor and Masters degrees, as saying they did not award her an MBA at any time as the university does not even have a graduate school or graduate programme.

The PUNCH learnt that a petition had been sent to the Chairman of the Peoples Democratic Party, Senator Iyorchia Ayu, asking the PDP to disqualify Oduah who has been screened to contest in the primary.

The group, Concerned Anambra North PDP Stakeholders, in a letter dated April 26, 2022, attached all necessary evidence to the party. However, there had been no response.

The National Publicity Secretary of the PDP, Mr. Debo Ologunagba, did not respond to calls on Wednesday.

In a chat with The PUNCH, Lagos-based lawyer, Inibehe Effiong, noted that a Federal High Court had already ruled that possessing an NYSC certificate was not a condition for holding public office.

Effiong, however, said Oduah’s claim on oath that she possessed an NYSC certificate when she knew this to be false amounted to perjury and disqualification.

“The court has ruled that the NYSC Act cannot be superior to the 1999 constitution which already outlines the prerequisites for holding public office. However, if she claimed on oath that she possesses an NYSC certificate when she had none, then this is perjury and is also grounds for disqualification,” said Effiong.

Attempts to get a response from Oduah proved abortive as her telephone line indicated that it was switched off. Also there was no response to a text message sent to her