According to Prophetess Rose Kelvin, the late Osinachi’s twin sister has refused to bring the singer’s children to visit her so that she may grant them the scholarship she promised. 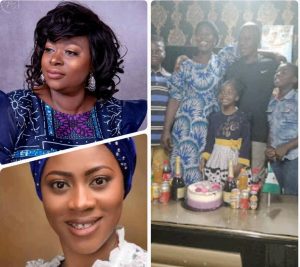 The Prophetess had vowed to provide scholarships to the late gospel singer’s four children following her death. So she urged her employees to contact the family and arrange for them to come to her church and receive the scholarship money in cash. She stated that she was willing to fund the children’s education from primary to secondary school.

However, when Rose Kelvin’s personal assistant said she contacted Osinachi’s twin sister, she alleged that she began making excuses as to why she couldn’t go.

Rose’s PA said that Osinachi’s sister gave him the reason that she was sick, and that two of Osinachi’s two children were sick as well, and that she sent him an account number to send the scholarship money to.

Rose’s PA informed her that they would not be able to deposit such a large sum of money into the account without first seeing Osinachi’s children. According to the PA, Osinachi’s sister even advised them that they should come to Enugu and give them what they have, but he told her that they couldn’t because of the instability in the South-East. She claimed that he questioned her why she declined to come see them for the scholarship at one point.

Rose Kelvin stated she had asked her staff how far he had gotten with his communication with Osinachi’s family as soon as school reopened, and the father informed her that he had been talking with them, but that he should wait until school resumed. Now that school has resumed, the family has given no signs of being serious about the scholarship.

Rose Kelvin stated that she had done her part and was devoted to funding the children’s education, but it is unfortunate that Osinachi’s twin sister declined to meet with her.

The gospel singer died on April 8th, 2023, as we all know. Her close friends and family members said she was a victim of domestic abuse and died as a result of her husband’s beating. The spouse was detained and accused in court.

Maureen asked why prophetess Rose Kelvin wants to give late Osinachi’s children cash when she knew there’s insecurity in the country. Why can’t she transfer the money into Osinachi twin sisters?
account?.

Why recording when Osinachi’s sibling came? Maureen said recording them is just a marketing strategy.