Popular Lagos medical practitioner, Femi Olaleye has broken his silence after being accused of r3ping an underage patient on admission. 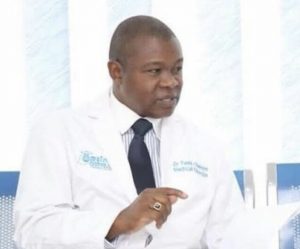 Recall also that a few months ago, Nollywood actress, Kate Henshaw called out the doctor and accused him of defiling his wife’s niece.

Also, a video shared by Gistlover allegedly captured the Doctor walking up to a young lady before having s3xual intercourse with her.

There were speculations that the lady in the viral video was a minor who was admitted to Femi’s hospital and he took her home to take advantage of her.

But in a statement issued on Wednesday, according to BBC, Femi denied the allegation of defiling his wife’s niece, who is a minor.

Femi noted he had underestimated the situation which he thought was a domestic issue with his wife and those encouraging her to destroy their home.

According to the medical practitioner, his work, person, and friendship are being threatened by false and malicious allegations.

He added that he has decided to fight against the allegations and blackmail against him.

The statement reads: “My name and organisation are in the news and on social media for all the wrong reasons.

“I think I may have underestimated the situation and thought it was a domestic issue which my wife and those encouraging her to destroy our home have weaponised.