Adegboyega Oyetola, the Governor of Osun State, has made new appointments. 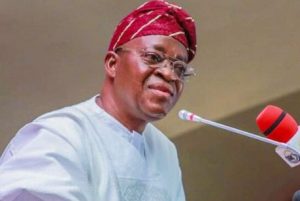 The governor, on Thursday approved the appointment of Permanent Secretaries to fill the existing vacancies in the State Civil Service.

The top government officials have occupied the positions of Coordinating Directors of their various ministries awaiting their appointment into the position of PS.

The Head of Service, Dr. Festus Olowogboyega Oyebade, in a memo announced the appointment of the new Permanent Secretary on behalf of the state government.

But the Governor-elect, Ademola Adeleke, threatened to sack them when he takes over two days from now.

Adeleke, who spoke through his media aide, Mallam Olawale Rasheed, warned the officials that they would be fired.

Adeleke said, “We want to put on records that those who accept the appointments should be ready to leave the service whether or not their service tenure has reached statutory age.

“The occupants will be treated as political appointees who will automatically follow the outgoing Governor out of public service from November 28.”