Over twenty people have been burnt to death when a petrol-laden tanker exploded in Ankpa, the headquarters of Ankpa Local Government in Kogi State. 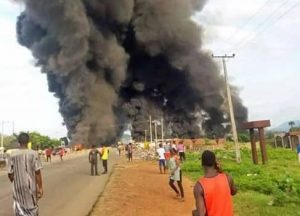 The tanker reportedly lost control due to brake failure and fell on the bridge of Maboro River before exploding.

An eyewitness said the incident happened around 3:30pm on Wednesday, September 28.

The eye witness said: “It’s the second major disaster in Ankpa within this month. This one is the most terrible and horrible. Over 20 persons were burnt to death, some beyond recognition.

“Many who were crushed to death had their body parts scattered all over the place. The parts were picked in pieces and put in body bags.”

The Kogi State Federal Road Safety Corps (FRSC) Sector Commander, Stephen Dawulung, confirmed the incident but said the number of casualties could not be established yet.

“My boys are there, putting the pieces together. We don’t know the number of the dead yet. A tanker, one bus, and three cars, three motorcycles were involved,” he said.