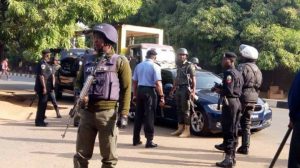 According to reports, Adeosun and his classmate simply identified as Ayo, engaged in a fight during school hours on Monday.

According to Punch, late Adeosun’s family claim Ayo confronted Adeosun for stepping on the toes of his (Ayo’s) girlfriend inside the class while Ayo said they were struggling over a schoolbag. The teenager reportedly ran away after Adeosun slumped but was later arrested on Tuesday by a team from the Agbado Division led by the Divisional Police Officer, CSP Kuranga Yero.

“We were at home when someone rushed to tell us that a pupil punched Habeeb (Adeosun) on the chest and he slumped. We learned he had been rushed to a hospital. We reported to the police station and some policemen followed us to the school. Some pupils who witnessed the incident said the boy confronted Habeeb for stepping on his (Ayo’s) girlfriend. He ran away when he saw that Habeeb could not stand up”

Ewenje said some angry youths mobilized to the school the following day blaming the authorities for allegedly allowing Ayo to escape. He said it took the police intervention to restore normalcy to the area.

“People were running helter-skelter. The school was eventually shut. The family didn’t know about the attack. We have accepted what happened in good faith and buried him according to Islamic rites. Police said they wanted to carry out an investigation but we insisted we could not delay his burial.

We are not interested in the case. Some pupils claimed that he hit Habeeb with a charming ring. If he did, God will reward him accordingly. Habeeb was 17 years old and he just completed his Quranic study” he said

Meanwhile, Ayo when interrogated said Habeeb was dragging his bag with him when a fight broke out. He claimed that the deceased first hit him on the chest and he returned the punch, which caused Habeeb to fall.

“I am 16-year-old. I live at Abule Ijoko and attend Itokin Community High School. Habeeb and I were both in the same class. That day, he came to my seat and took my bag. I asked him to return my bag but he refused. I thought he was playing with me. As we were dragging the bag with each other, he hit me on the chest. I returned mine and he fell.

I thought he was joking. Our classmates poured water on him and rushed to call teachers. The attendants at the school clinic came to check him but he didn’t respond. They then rushed him to the hospital.

I didn’t hit him with any ring. We were friends and we used to play with each other. I didn’t run away. It was our teachers who asked someone to take me away because some thugs were threatening to kill me. I was crying when I learned he had died.”

Confirming the incident, the spokesperson of the state police command, DSP Abimbola Oyeyemi, said an investigation into the matter has commenced.

“The suspect and the victim were classmates. They disagreed the classroom which resulted in a fight. He (Ayo) reportedly hit the boy with a ring said to be diabolical. The victim slumped and died afterward. An investigation is ongoing.” a police source said.