According to GIOTV, a Federal High Court in Lagos has mandated the detention of millionaire businessman Ukatu Mallinson, who was connected to the alleged N3 billion cocaine deal involving suspended Deputy Superintendent of Police (DSP) Abba Kyari. 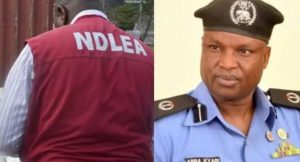 The remand of Ukatu Mallinson and his accomplice, Sunday Ibekwute, was mandated by Justice Peter Lifu.

The National Drug Law Enforcement Agency accused the two defendants of conspiring, trafficking 322 kilograms of tramadol, and engaging in the illegal distribution and possession of the aforementioned illegal drug. Both defendants entered a plea of not guilty to all of the charges (NDLEA).

The duo were arraigned before the court on Friday where the prosecutor, Mrs Theresa Asuquo, told the court that the alleged offence contravened Sections 14(b); 11, and 11(b) of the National Drug Law Enforcement Agency (NDLEA) Act Cap N30 Laws of the Federal on Nigeria (LFN) 2004.

In the charge, the NDLEA alleged that Mallinson, Ibekwute, and one Pius Enidom, (who is said to have jumped bail) conspired on May 4, 2021, among themselves to traffic and were in unlawful possession of 322kilograms of tramadol.

But the two defendants denied the allegations and pleaded not guilty to the charge.

Their counsel and a Senior Advocate of Nigeria (SAN), Emeka Opara, while moving their bail application following their plea urged the court to admit them to bail in the most liberal terms.

He submitted that his clients were presumed innocent of the charge against them until the contrary was proven.

Opara also told the court that the first defendant, Mallinson, is an industrialist who is in partnership with the Nigerian Air Force and numerous other workers.

He also stated that the second defendant, Sunday, was one of the first defendant’s employees and assured the court that his clients would not jump bail if granted.
But the prosecutor urged the court to decline to grant the application on the ground that they were a flight risk.

In urging the court to deny them bail, Asuquo asked the court to take a critical look at some paragraphs of the agency’s counter-affidavit in opposition to the defendants’ bail application.

Justice Lifu, on his part, adjourned the matter till July 18 for ruling on the bail applications and ordered that both defendants be remanded in the facility of the Nigerian Correctional Services (NCoS).

He also issued a bench warrant against Pius Enidom who had failed to appear in court despite being issued a hearing notice.