Nweke Ifeanyi, who survived the June 5th terror attack at Saint Francis Catholic Church in Owo, Ondo State, has mourned the death of his younger brother. 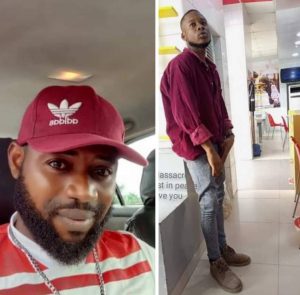 On Friday, June 17, the late Chukwuemeka Fabian Joseph Nweke was among those laid to rest in Owo.

Ifeanyi, who still has bullets in his body, said goodbye to his brother on Facebook.

“Dear Fabian, you will forever remain a hero in my heart as we celebrate your funeral mass today, it is so painful and unbearable to use my injured hand to bid farewell. Rest in peace my dear brother” he wrote.

Their cousin, Osmond, who was at the funeral also mourned Chukwuemeka.

“Today, the 17th of June, 2022, there will be episcopal requeim mass by the Bishop of Sacred Heart Caterdral Akure Ondo State His Lordship, Dr Jude Arogundade, for those brutally murdered by terrorists at St Francis Xavier Catholic Church Owaluwa Street Owo in Ondo State where one of my cousins, Master Fabian Chukwuemeka Nweke was a victim,” he wrote.

“Too painful that you are leaving us at this prime age. You had plan for your life but this was cut short by the messengers of devil who forced their way into the House of God and ended up cutting short your lofty dreams. As we are in pains so shall the terrorists never find peace all their lives.

“Brethren, help me pray for the repose of the soul of Chukwuemeka Fabian Joseph Nweke and divine healing of his elder brother, Nweke Ifeanyi who is still having some bullets lodged in his body.” 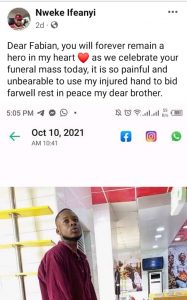