Two film practitioners, Cynthia Okereke and Clemson Cornel aka Agbogidi, who were kidnapped recently were on Thursday, August 4, set free by their abductors. 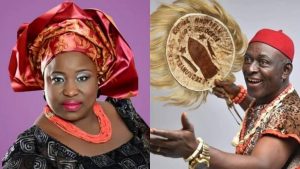 The film stars’ release, it was gathered, was facilitated after being in the custody of kidnappers for one week.

According to a family source, Okereke and Agbogidi were released by their abductors after parting with the sum of N3million.

The source also alleged that the sum was paid by the families of the abducted film stars.

“The kidnappers asked for money and the families paid a total of N3 million.”

It was further alleged that the sum of N3 million was accepted because the kidnappers had cleaned out the entire sum of money in Okereke’s bank accounts a few days after they were abducted.

“The kidnappers had earlier wiped Okereke’s bank accounts using her ATM card before the families paid the N3 million ransom after they made a contact to which negotiation of their release began.”

Speaking on her ordeal in the kidnappers’ den, Okereke said, “My BP is high, but to God be the glory for all of you. Your effort and your prayers ensured that Cynthia is alive. I will act for you people and continue to work for you. They thought I was going away, but I am not. For a good one week, I was there without water or food. But today, I say God to you be all the glory forever and ever.”

The actors were reported missing on July 28 after their family members confirmed they didn’t return home from a film location at Ozalla Town, Enugu State.