Former Lagos State Governor Asiwaju Ahmed Bola Tinubu has boasted that he is the only presidential candidate running for his party’s ticket. 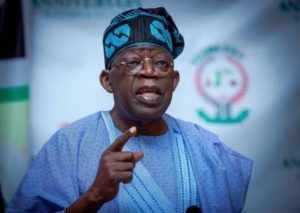 Tinubu belongs to the All Progressives Congress.

Tinubu stated that he is unconcerned about the number of people vying for the APC’s sole ticket ahead of the party’s primaries.

The APC leader said this during a visit to Niger State Governor Alh Abubakar Sani Bello in Minna, Niger State, that he is the only candidate who knows how to get Nigeria out of its current quagmire.

“If they ask you to follow them (other aspirants), ask them where? They don’t know the road. I am the only person who knows the road. The only person you should follow is me. I won’t mislead you, they don’t have my brain. I am the smartest of them all.

“Everytime they keep saying, I am not well, I have travelled for medical attention, I have gone to Mecca, and they don’t have medical certificates. They said, I have bad legs as if I am their grandfather. Yeye people,” the former governor fumed.

Tinubu noted that as a bridge builder, he has raised politicians who later became state governors, senators, House of Representatives and state house of assembly members in the country.

According to him, “They are all pointing accusing fingers at the wrong person. They are talking, the question is, how many counsellors, house of assembly members, state governors, senators and House of Representatives members have they produced? I alone have produced them all in this country.”

When the Niger State Governor asked the state delegates if they supported Asiwaju Tinubu’s aspiration, they all replied, “Yes, we support him.”

Bello then stated that he has nothing further to say on the subject.