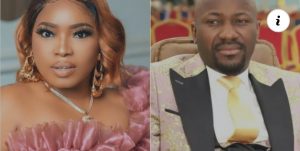 Suleman and Halima allegedly dated at one point, according to Halima, who called him out on social media in September 2022. Nevertheless, Suleman threatened to sue her for making “defamatory accusations”.

As news of Halima’s struggle with an unspecified sickness spread, it seemed as though the situation had subsided.

The movie star, however, said they dated for six years in a recent interview that was broadcast live on Instagram. She also said that when rumors of their alleged affair initially spread, she asked the cleric for advice on how to respond but he told her to “go and die”.

Halima was asked if she had ever been pregnant for Suleman in a now-viral interview footage, and she said, “Yes, I was once pregnant for him.”

When pressed further about why she terminated the pregnancy, she responded:

When I lost the baby, he was crying, you would think it’s real because he was shedding tears that I lost his child.

It’s crazy. I got pregnant three times for him. The last one got me bleeding…I had to take tablets to stop it.
She said concerning how long it took the bleeding to stop, “For four years. I actually just came out since I have been in a long spiritual battle… the blood just stopped rushing, you won’t believe it.

Halima claimed that the cleric had slept with her while she was bleeding in another interview clip.

He was sleeping with me even while I was bleeding. That’s the dangerous part of it, and he was telling me he couldn’t sleep with any other person, that’s why. The whole thing took me unawares because I was naive and not a spiritual person. Even when I’m on my period, he does that.
Halima declared that she is prepared to testify in court to show that the two had an affair.