President Buhari has said no one would be able to blackmail him after he leaves office because he has no property outside Nigeria. 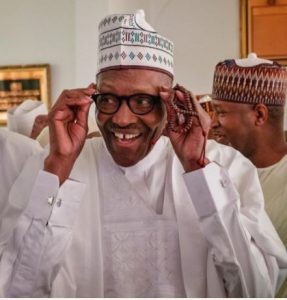 The president stated this at a State banquet, organized in his honor in Damaturu, the Yobe State capital by the Yobe state government on Monday, January 9.

President Buhari said that despite all the challenges facing the country, he had tried all his efforts to ensure the situation changed for the better for his fellow Nigerians. The president expressed his happiness that ”normalcy had returned to the affected states in north-east Nigeria, noting that the potent and pervasive threat of terrorism was the most significant security challenge the administration took on nearly eight years ago.”

He recalled that Yobe State was among the states most heavily attacked by terrorists and that the threat was particularly pervasive throughout the North East geopolitical zone.

“In the North East, God has helped us to clear Boko Haram, the economy has picked up and some people are asking me about the achievements of my promise to fight corruption.

Well, under this system fighting corruption is not easy. When I was in the military, as Head of State, I locked up some people because the Constitution says you must declare your assets, and for people who couldn’t explain the differences in their assets, I locked them up.

In the end, I was also locked up. So, if you want to serve this country you must be prepared for the worst. But one thing that I am grateful to God for is that nobody can blackmail me. I do not have one-square inch outside Nigeria and I intend to stay in Nigeria when I retire from public office.

Between 2003 and 2019, I visited all the local government areas in this country. In 2019 when I attempted a re-election, I visited every state and the number of people that came out to see who this Buhari is and was is more than what anybody can pay or force.

So, I thank God that Nigerians understood me and I made a promise that I will serve God and Nigerians.” he said