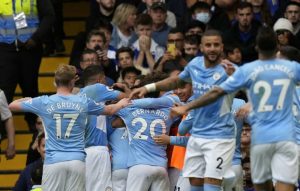 According to Optajoe, Man City’s win against Chelsea means Guardiola has now won his 221st victory in all competitions as the Citizen manager.

It is a new club record for most wins by a manager, moving ahead of Les McDowall (220 wins).

The 50-year-old led Man City to win the Premier League and the Carabao Cup last season.

The Spaniard will now hope to guide City to victory when they take on Paris Saint-Germain in the Champions League on Tuesday.