Some filling stations around Abuja and neighbouring states were shut down on Tuesday which led to a long queue for Premium Motor Spirit, popularly called petrol, at the few outlets that dispensed the commodity. 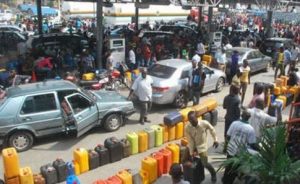 Petrol scarcity resumed again in the Federal Capital Territory and environs on Tuesday after about a month break, as motorists and other PMS users imagined when they would see the last of fuel queues in Abuja.

The petrol scarcity and its attendant queues on Tuesday were due to the warning strike embarked upon by the Suleja Depot Branch of the Independent Petroleum Marketers Association of Nigeria.

The oil marketers commenced the three-day warning strike on Monday and stopped their members from lifting petrol from the depot to more than five states in the North including Abuja, a development that caused scarcity on Tuesday.

The two ever-busy filling stations, Conoil and Total, located right in front of the headquarters of the Nigerian National Petroleum Company Limited, shut their doors to customers on Tuesday.

Reason being that they had no product to dispense. However, black marketers in front of the filling stations and opposite NNPC headquarters, used the opportunity to sell their wares at higher rates to motorists.