On Tuesday, troops from the 26 Task Force Brigade discovered Mrs Mary Ngoshe, who is believed to be one of the kidnapped girls from Government Girls’ Secondary School in Chibok in 2014. 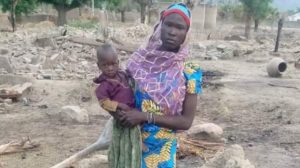 Ngoshe, who was discovered with a child believed to be hers, was apprehended by troops while on patrol in the Borno State town of Ngoshe.

This is contained in a tweet posted to the Nigerian Army’s verified Twitter page, @HQNigerianArmy, on Wednesday morning.

The tweet reads, “Troops of 26 Task Force Brigade on patrol around Ngoshe in Borno State on 14 June 2022 intercepted one Mrs Mary Ngoshe and her son. She is believed to be one of the abducted girls from GGSS Chibok in 2014. Further exploitation ongoing.”