The coffin of Dr Chike Akunyili, the late husband of former Minister of Information and Director-General of National Agency for Food and Drugs Administration Control (NAFDAC), Dora Akunyili lay in state on Thursday morning at his house in Agulu, Anambra State. 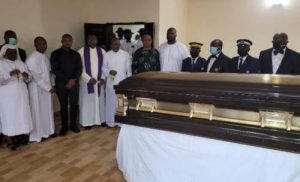 Grieving family members were present to honour the deceased.

Pontifical Requiem Mass for the deceased will come up at Madonna Catholic Church, Agulu, under Anaocha local government area of Anambra State, to be followed by interment at his country home.

This was contained in the burial arrangement released by his family, which was obtained by SaharaReporters on Wednesday.

Dr Akunyili, a medical doctor was assassinated by unknown gunmen on September 29, 2021, in Anambra State.

Burial activities had begun on Thursday, 18th November, with the Cancellation at the Knights Temple at Holy Ghost Cathedral, Enugu.

There will be a condolence visit by in-laws, friends and well-wishers on Friday, while thanksgiving service will occur at Madonna Catholic Church, Agulu on Sunday.