The National Industrial Court sitting in Abuja has ordered that the Nigerian Association of Resident Doctors are restrained from continuing with the ongoing strike pending the determination of the substantive suit before it. 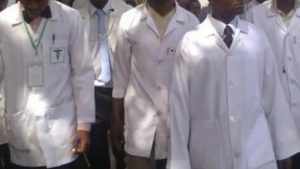 The doctors had commenced the strike on August 1 over “irregular payment of salaries”, among other issues.

The court, therefore, ordered members of the association nationwide to return to work.

The court held that there is no amount of money that will compensate for the loss of lives in the circumstances.

Justice Bashar Alkali made the order on Friday while ruling on an application by the Federal Government in the suit against NARD.

He also prayed the court to compel the members of NARD nationwide to return to their duty posts pending the determination of the substantive suit.

He argued that resident doctors as persons who provide essential services cannot embark on strike and continuing to do so will wreck hardship on citizens.

The resident doctor’s lawyer, Robinson Ariyo, vehemently opposed the application for interlocutory injunction and urged the court to discountenance their application.

He argued that the life of a medical doctor is not less useful than the life an average human being.

He argued that justice must be balanced, not just to the government, but also to the doctors who are the field marshals in the face of the ongoing COVID-19 pandemic.