Asiwaju Bola Tinubu, the Presidential candidate of the ruling All Progressives Congress, APC has officially unveiled Kashim Shettima as his running mate. 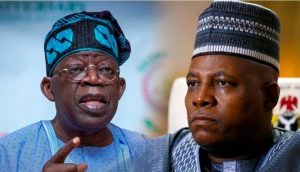 Speaking at the unveiling event held at the Shehu Musa Yar’Adua Centre in Abuja, Tinubu who justified his choice of Shettima despite opposition to the Muslim-Muslim ticket, stated that “true leadership is not grounded in religious pandering, populism or sentiment”.

“We will change this country for the better.

“All my life, my decision regarding the team around me and those I work with are guided by principles of competence, innovation, compassion, integrity, fairness and adherence to excellence.

“In politics those principles are sacrosanct. They are not negotiable. Without them, there can be no victory or joy.

“This is where politics must end and leadership must begin. True leadership is not grounded in religious pandering, populism or sentiment. To forge ahead as a nation toward development and prosperity, we must, instead, break the shackles of old thinking.”