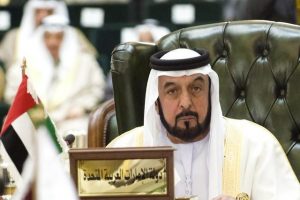 “The Ministry of Presidential Affairs condoles the people of the UAE, the Arab and Islamic nation, and the world over the demise of His Highness Sheikh Khalifa bin Zayed Al Nahyan, the president of the UAE,” a statement released by the state news agency, WAM, reads

Sheikh Khalifa bin Zayed Al Nahyan served as the president of the UAE and Ruler of Abu Dhabi since 3 November 2004. He was elected to succeed his father, the late His Highness Sheikh Zayed bin Sultan Al Nahyan, who served as the UAE’s first president since the union in 1971 until he passed away on 2 November 2004.

Born in 1948, Sheikh Khalifa was the second President of the UAE and the 16th Ruler of the Emirate of Abu Dhabi. He was the eldest son of Sheikh Zayed.

May his soul rest in peace, Amen.