Yemi Osinbajo, the Vice President and presidential candidate of the All Progressives Congress, has stated that if elected in 2023, he will begin work immediately. 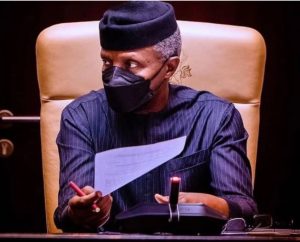 According to a statement signed by his media aide, Laolu Akande, Osinbajo said this during a consultation visit to APC delegates and traditional leaders in Cross River and Bayelsa States on Thursday.

He stated that his seven years as Vice President, as well as his experience in other aspects of public service, have provided him with the necessary knowledge, information, and know-how to hit the ground running from day one if elected President.

Addressing the members of the Cross River State Traditional Council, Osinbajo noted that Nigeria would overcome its economic and security challenges.

“The truth of the matter is that, every country is faced with peculiar challenges – in our case, we are faced with security and economic challenges. But we also know that God Himself equips us with all the necessary resources to defeat every challenge. I believe very strongly that God helping us, our economic and security challenges will not only be dealt with, but will be stepping stones for a greater nation and a more prosperous and secured nation,” he said.

While at the Palace of the Obong of Calabar, the former Attorney-General of Lagos restated his invaluable experience in government, as Vice President and at some point, Acting President.

“Your Royal Majesty and Paramount Ruler present, in my capacity as VP, I had the great fortune of working with President Buhari, who in every real sense exposed me to all one should know about governance at the highest level in our country.

“Our country is complex, diverse, and rich in resources, and with the diversity and various complexities, it obviously requires some experience. I have had the good fortune of serving for 7 years, observing first-hand the intricacies of our nation. On occasions also, I have served as Acting President of our country.

“I think that with all the experience I have been able to gather within that period, it is clear that God’s intention was that all that experience would become useful one day and I believe that that time has come when our country calls for a successor to President Buhari who by May 2023 by the grace of God, would have served for 8 years,” Osinbajo was quoted as saying.

In Cross River, Osinbajo was received by the State Governor, Ben Ayade, accompanied by stalwarts of the APC in the South-South geo-political zone, including Senator Victor Ndoma-Egba, former Minister Edem Duke, former NDDC Managing Director, Obong Nsima Ekere among others.

While in Bayelsa, the vice president was welcomed by the State Governor Douye Diri, and senior state government officials.